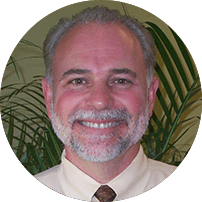 Michael K. Lewis, CLP, is Executive Vice President of Foliage Design Systems (FDS), one of the largest interior landscape companies in the nation. With over 4 decades in the industry, he has been involved with some of the more innovative interiorscaping projects throughout Central Florida. Mike plays an active role in new business development along with providing marketing strategy and support to the national FDS franchise network.

Prior to joining FDS in 2001, Mike was President and partner of Plantscape House, where he oversaw all sales and operational issues, helping guide the small start-up business into a multi-million dollar enterprise. In 1996 Plantscape House was sold to TruGreen ChemLawn, where Mike rose to the position of National Sales and Marketing Director for the company’s Interior Plant Care Division.  During his time with TruGreen, Mike was responsible for overseeing all sales and marketing issues for the 24-city, $45 million dollar business.

A third generation Central Floridian, Mike is actively involved in various organizations including being a trailblazer for PLANET and serving on the Board of Directors for BOMA of Central Florida. He has served on the board of Green Plants for Green Buildings (GPGB), a national non-profit trade organization whose purpose is to promote the use of live plants indoors, and where he served a President for 5 years. He is also a past Chairman of the City of Orlando’s Parks and Recreation Board. Mike has a BS Degree in Agriculture from the University of Florida and is a Certified Landscape Professional. He has 2 children, Matthew and Mackenzie.