What do you think of dollar weed? | Foliage Design Systems Corporate 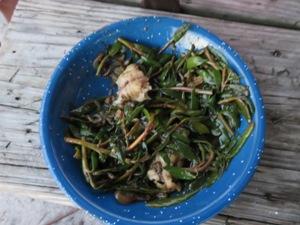 I am often intrigued with our multicultural view of flora and fauna. What is a weed to one is beautiful landscape plant to another. What do you think of dollar weed? For some it’s the pesky weed in our lawn scape that we are forever treating with species specific herbicides so we can kill it off and have grass dominate the front yard. Over in California, they buy it at the garden center to plant in the lawn, well, to become the lawn!

Purslane is another plant that is found throughout the country. Some species have no place in the landscape for many and are routinely routed out and destroyed. But some of its family members, looking darn similar if you ask me, are bought in the garden center and planted in precious spaces in the landscape.  This past weekend we spent camping on a spoil island in the Mosquito Lagoon. The islands had been formed in the 1950s out of dredged substrate, the results of channelizing the intercoastal waterway. Over time, both native and non-native plant materials have taken hold and the islands, now controlled by the National Park Service, are a fine place to camp. 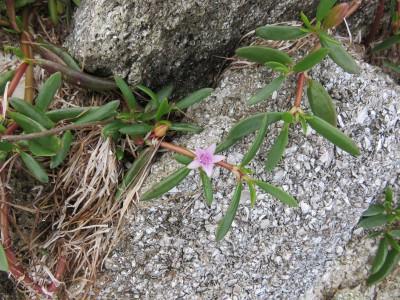 Dense mats of sea purslane (Sesuvium portulacastrum) line the island edges looking both like the ornamental portulaca I can buy commercially AND the weed I unceremoniously rip out of my garden. And, in fact, it is the very same plant cultivated in Japan for food . A weed after all is defined as any plant growing where it is unwanted, a definition with broad boundaries indeed!   So, to avoid further confusion, I went right for the food part. And , what the heck, in order to go all the way, what do you think of jellyfish? In this case the cannonball jellyfish,  (Stomolophus meleagris) native to Florida waters and kind of lazily swimming along (if you can call that swimming) the shores of the island right up there close to the sea purslane. If you prepare them right, as in cutting off the stingers that contain a mild toxin, they are eaten with great relish in Asian countries, but I assure you , you won’t find them in the Publix seafood counter any time soon. 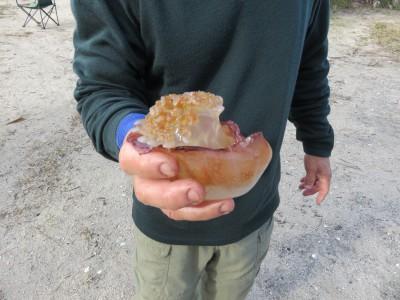 The jellyfish, on the other hand,  did not look like any creature I disassembled to make food in my decades long efforts as an outdoorsman; so thankfully we got signals on our iphones. That postage-stamp-sized instructional looked simple enough and I think I got it right, at least I hope I got the part right about the removal of the stingers. I was able to get the cork out of the bottle of Chard with the ridiculously small cork screw that came with my Swiss Army knife so I think I have enough digital dexterity to get the job done…I think.

No worries, we were hosting four of my daughter”s best friends and really,  all FOUR of them can’t be your best friends can they? The sea  purslane, was easy. Plump and succulent snapping of the tender tips was easy enough for the teens, when I sent them back  a second time to be sure to not harvest the roots, seashells , sand and other unappetizing flotsam that washes up on the shores of lagoons often thick with boats and human activity. Hey , these kids really are great, but at some point I think I did compliment them on being High Functioning Zombies as opposed to the lower functioning types.

Anyway, the sauté pan I brought, more suitable to the commercial kitchen than the camp fire, served us well.  It was already hot from pan seared chicken; the chicken already bubbling in another pot deserving better treatment, to become our  camping favorite, chicken and saffron rice. A light film of chicken fat coated  the bottom of the pan shimmering in the  light of the leaping flames fueled by about a cup of chicken fat just dumped into the fire, bursting forth with enough brilliance to knock back the kids by 3 feet or so. My wife, Lisa,  wiser and more experienced, had already taken cover behind a  cabbage palm, on the other side of the island. Note to self, I know it’s hard to manage wine glasses in camp, but if you drink out of the bottle it’s hard to measure.

Into the pan goes the pre-rinsed sea purslane, following quickly by the sliced jellyfish and fillets of catfish.  I got the pan over a very hot spot; I want this dish to stir fry, not steam. Just about 4 minutes later the catfish fillets curl up, the purslane is wilted but still firm and the jellyfish is, kind of gone. But, oh what a dish! I declare it fantastic.   The purslane is slightly crunchy and naturally salted to perfection. The catfish as good or better than the Publix brand with just enough fish flavor to suggest it came from the sea, not the farm. The tidbits of jellyfish, after reduction in size by about 99%,  taste like catfish, and purslane has no real flavor of its own. But the real test ( I wanted to eat the raccoon that raided the campsite every night) was what Lisa and the kids thought.  They all gave an enthusiastic thumbs up;  but to the person, hastened to decline seconds.

Catch of the day – Hardhead Catfish 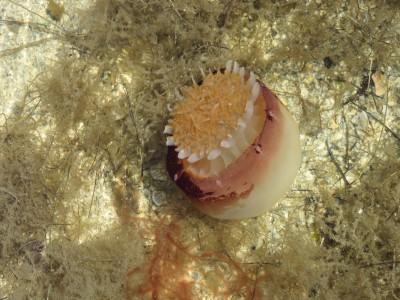 There is indeed something about a remote island so  far from the pollution of man-fueled lights that the stars look like a planetarium. Isn’t it supposed to be the other way around? Nothing is better than fish flopping about moments before hitting the pan, vegetables cooked with the crisp snapping sound of stems separated from the ground still fresh in the ear, and jellyfish, well for that I have no words.  After dinner, using freshly carved palm petioles, the kids toasted their marshmallows in that timeless tradition of the campfire, now approachable with flickering flames and a gently glowing bed of  coals.

We are all so different in what we perceive. Take in your natural environment. What is to you is not to the other and so on and so on. The kids love their smores,  and I do not. At least I think I do not. I wasn’t allowed close enough to the campfire to taste one.